Home > Lent > From Death To Life

I would like to start this reflection with what, in my opinion, is one of the most important questions one could ever ask: What does it mean to love one another?

“And He took bread and giving thanks, He broke it and gave it to them, saying, ‘This is My body which is given up for you; do this in memory of Me.’” 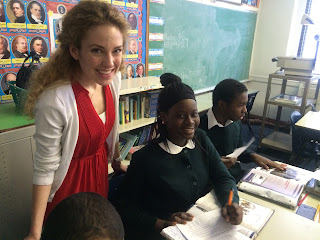 “This is my Body which is given up for you.” This statement highlights the essence of Good Friday. Christ gives himself up, enduring intense physical, emotional, and even spiritual pain, for our salvation. This is the line we hear at Mass during the Liturgy of the Eucharist. As we remember Christ’s sacrifice when we take the Eucharist in Mass, it is also important that we His sacrifice and act upon it each and every day.

This line has played an interesting part in my service at St. Thomas of Canterbury Catholic School. While it is probably more politically correct to say that I don’t have favorite students, I am just going to admit that I have a bunch of favorites. There is one student in particular, a hilarious, energetic, and always-smiling fourth grader named Lang, of whom I am particularly fond. Lang is the kind of kid who will style his hair in a Mohawk and run laps around the cafeteria one minute, but the next will ask you to pray with him. Earlier this year, I noticed that Lang was acting uncharacteristically moody and that he was secluding himself and crying during the after school program. Day after day, I would ask him if everything was okay, and eventually he hinted that something was going on at home. I knew bits and pieces about his home life, but even with gentle questioning, Lang would not discuss the heart of the issue with anyone – not his friends, nor his teacher, nor me.  Knowing how detrimental it is to force kids to confide when they aren’t ready or don’t want to, I left the issue alone with a simple, “I am here for you if you ever would like to talk.” 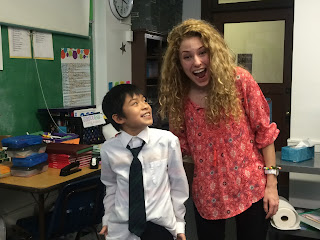 But his visible emotional pain continued to torture me. I cried about his struggles and agonized over what more I could do to help him. After each interaction with Lang, I was left feeling both helpless and angry knowing that there was probably nothing I could do to help the situation.

So how does this relate to the death that Christ endured for us on Good Friday?
During our lifetimes, very few of us are asked to literally sacrifice our lives and die for our beliefs or loved ones. However, each and every one of us are asked to die to our egos and our desires. This year, part of this death to ego for me has been realizing that I cannot save the world, I cannot do it all. And necessarily enveloped in this has come a redefining of what justice means for my life. Going into this year, justice always meant big, dramatic life-changing acts or movements. But during my time as a Amate volunteer through CVN, and in particular my time at St. Thomas, I have realized that I have been wrong about what exactly this notion of justice entails. There has been a death to the idea that justice always means making huge sweeping actions or policy changes, and life has been given to the idea that justice can be much more nuanced. By no means do I mean to minimize the importance of life-changing social movements and grand fights for what is right. But I have realized that justice also thrives in quiet accompaniment, the grace of a compassionate smile, and the impartment of the knowledge that one is not alone.

In the situation with Lang, spreading Christ’s love and justice did not and could not involve radical endeavors, but rather it meant walking beside him in his struggles, letting him know that I cared, encouraging him to pray, and laughing with him. Helping him carry his cross did not mean getting to the bottom of what was going on, but it meant humbly realizing that what Lang needed was simply someone to be with him in both his sadness and his joy.

The answer to one of the most important questions we can ever ask: “What does it mean to love one another?” Is humbly found in Jesus’ actions at the Last Supper, “He broke it, and gave it to them saying ‘This is My Body which is given up for you. Do this in memory of me’.”

This year has helped me learn that to love one another means to take on the action of Christ. That is, to die to our egos, our needs, our desires, such that we are broken by and through both our own crosses and the crosses of others. And it is only in this painful brokenness of the Good Friday cross that we are raised up to eternal life in love.

To learn more about serving with Amate House, click here!