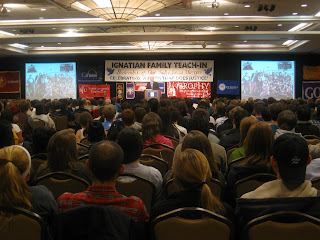 Alright, I’ve covered faith, simplicity and community, so there’s only one pillar left… social justice. What is social justice exactly? I have to say that Wikipedia did a pretty good job with this one. It says: “Social justice generally refers to the idea of creating a society or institution that is based on the principles of equality and solidarity, that understands and values human rights and that recognizes the dignity of every human being.” But the more challenging question that we have to ask ourselves is: “How is social justice achieved?”

1. Life and Dignity of the Human Person
2. Call to Family, Community and Participation
3. Rights and Responsibilities
4. Option for the Poor and Vulnerable
5. The Dignity of Work and the Rights of Workers
6. Solidarity
7. Care for Creation

So how do we work to create change in these areas for social justice? Through service of course! Our annual membership survey recently reported that Catholic Volunteer Network has over 19,000 volunteers serving in 191 program sights fighting issues of poverty, education, hunger, homelessness, health care and more.

Over the last four months, I’ve been able to reflect on my own experiences working for social justice and inform students about the countless ways that they can do the same. But in November, I got to witness social justice in the making in two very new ways.

During the weekend of November 12th and 13th, I attended the Ignatian Family Teach-In. At this event, hundreds of students from Jesuit Schools and institutions all around the United States gathered at Georgetown University to learn about issues ranging from poverty and hunger in Africa to immigration and refugee policy in the United States. Then on Monday, the students gathered in groups to advocate for social justice in their legislators’ Washington D.C. offices. Keynote speakers included Bro. Mickey McGrath, Jen Smyers and student speakers. But I think the speaker that resonated with me the most was Jim Keady. Jim is the face, voice and momentum behind Team Sweat, an “international coalition of consumers, investors and workers committed to ending the injustices in Nike’s sweatshops around the world.”

After studying the injustices that Nike factory workers endure, Jim traveled to Indonesia to live with the workers for one month and attempt to sustain himself on their same wage… $1.25 per day. His experience is documented in the film Behind the Swoosh.

(http://www.youtube.com/watch?v=M5uYCWVfuPQ) Jim called his audience to be aware of how our actions perpetuate unhealthy sweatshop conditions and to fight to change it. There is no doubt that his talk le me to think twice before purchasing clothing made in sweatshops (which is nearly all of them) and put greater effort into purchasing clothes second hand or that are made in the United States. You can learn more about Jim Keady and Team Sweat’s mission at www.teamsweat.org.

I left the Ignatian Family Teach-In feeling empowered by new knowledge and inspired by the energy of the students present. A few days later, I traveled to Indianapolis to exhibit at the National Catholic Youth Conference, the theme of which was “Called to Glory”. After spending three months on college campuses, I would now be greeted by 23 THOUSAND(!!!) high school students. All I have to say is- what an amazing event! Each day opened and closed with praise and worship, speakers, and prayer in the Lucas Oil Stadium and students could attend workshops throughout the day in the conference center. I spent most of my time in the Thematic Park with approximately 300 other exhibitors including performers, Catholic publishers, ministries and countless religious orders. 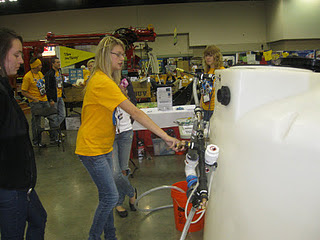 One exhibitor that drew my eye was Fountains of Hope. I was drawn to their large display replicating a Haitian slum and volunteers in bright yellow shirts standing near large plastic canisters. I learned that those canisters were water purifiers created by Bill Farrar, Founder and CEO of Fountains of Hope. But what really impressed me were the yellow-shirted volunteers were from South Adams High School in Berne, Indiana. Last year the high school raised $42,000 to purchase 5 purifiers and pay for a group of eight students and eight staff to travel to Haiti, install the purifiers and teach the local community how to use them. Other social Justice related exhibitors included Catholic Charities USA, Teens for Life and Catholic Relief Services.

These experiences remind me that even after completing my volunteer year, my fight for social justice is far from over. Throughout high school and college, my focus was primarily on issues of hunger and homelessness within the U.S. Now, I feel compelled to broaden that spectrum of issue topics and locations. So as I sign off of my final blog. I leave you with my favorite poem by Archbishop Oscar Romero. May it grant you the same encouragement in your pursuit of social justice that it has for me.

It helps now and then to step back and take a long view.
The kingcom is not only beyond our efforts, it is even beyond our vision.
We accomplish in our lifetime only a small fraction
Of the magnificent enterprise that is God’s work.
Nothing we do is complete, which is another way of saying
That the kingdom always lies beyond us.
No statement says all that could be said. No prayer fully expresses our faith.
No confession brings perfection.
No pastoral visit brings wholeness.
No program accomplishes the Church’s mission.
No set of goals and objectives includes everything.
This is what we are about:
We plant the seeds that will one day grow.
We water seeds already planted, knowing that they hold future promise.
We lay foundations that will need further development.
We provide yeast that produces effects far beyond our capabilities.
We cannot do everything, and there is a sense of liberation in realizing that.
This enables us to do something, and do it very well.
It may be incomplete but it is a beginning, a step along the way,
An opportunity for the Lord’s grace to enter and do the rest.
We may never see the end results,
But that is the difference between the bmaster builder and the worker.
We are workers, not master builders;
Ministers, not messiahs.
We are prophets of a future not our own.

{Vatican Radio} Pope Francis: voluntary workers are builders of peace and harmony
Watching Them Blossom: Getting Things Done with Little Sisters of the Asummption Family in Mission
GameDay
Is “Going Green” the Christian Thing to Do?