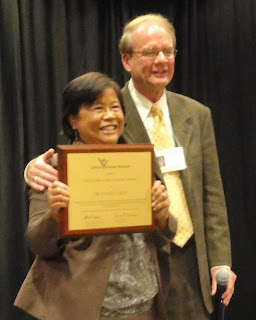 On October 29, 2010, Catholic Volunteer Network presented the Father George Mader Award to Dr. David Suley in honor of his efforts in supporting mission work. The award was given during the banquet for Mission Congress 2010, at the Albuquerque Marriott.

David Suley holds a doctorate in ministry (with a focus on spirituality and justice) from an ecumenical program at Wesley Theological Seminary, Washington, D.C., as well as a master of theology degree and a master of divinity degree from St. Patrick’s Seminary, Menlo Park, California. He served as a lay missionary in Malawi, Central Africa, and is a member of the U.S. Catholic Mission Association.

From 1982 to 1987, Dr. Suley served as the Executive Director for the International Liaison of Lay Volunteers in Mission (now Catholic Volunteer Network). From 1987-2000, he was director of the Church Relations department at Bread for the World, a national ecumenical movement which seeks to pass legislation and affect public policy on behalf of low-income and hungry persons.

For the past decade, Dr. Suley has served the U.S. Conference of Catholic Bishops in the Home Missions office, for the last several years as Director. He has years of experience with the pastoral and financial challenges the Church faces in Alaska, the Rocky Mountain states, the Southwest, the Deep South, Appalachia, and the island dioceses in the Pacific and Caribbean. Dr. Suley is an adjunct faculty member in the master of arts in pastoral leadership program at Chaminade University, Honolulu. He is married and the father of two children, and will soon become a first-time grandfather. Dr. Suley and his wife reside in Silver Spring, Md.
“Dr. Suley truly exemplifies what Fr. Mader and his sister started 47 years ago,” said Jim Lindsay, Catholic Volunteer Network Executive Director. “He has stayed true to his missionary roots both in his professional and personal life and for that we honor him.”
“Since my years of lay missionary service and in visiting our mission dioceses across the country, I have been enriched by people’s deep faith and their unique cultural traditions,” Dr. Suley said. “I am blessed to share this honor with my wife, Arceli, who has accompanied me in this mission vocation for the past 40 years now.”

The Father George Mader Award was created in 1988 to honor organizations and individuals that foster faith-based service in the United States and abroad. The award is named after Father George Mader of the Archdiocese of Newark, New Jersey, who in 1963, together with his sister, Patricia Mader Stalker, founded what is today known as Catholic Volunteer Network.

Good Eats - Volunteers across the globe learn to cook on a budget.
"Do not be afraid" Advent Reflection by Taylor Gostomski, Augustinian Volunteers
Christ in Disguise: Bon Secours Volunteers Reflect on the Corporal Works of Mercy
Alumni Speak: Moving into Action in the Philippines