Home > Uncategorized > “Getting Things Done” for MLK Day of Service 2013 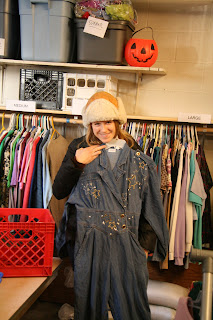 Catholic Volunteer Network – AmeriCorps
It is no wonder why Dr. Martin Luther King Jr. was such an inspiration for generations of people in the United States and worldwide. His words reached many and crossed barriers that commonly were not broken. I was happy to take part in this National Holiday to learn from and serve the community that I live in.
Our day began by joining a community engaged in celebrating Dr. King’s legacy over a catered breakfast from Fay’s Homestyle cooking. While there, we joined in soulful singing, thoughtful reflection and prayer until Marian Wright Edelman, the founder and president of Children’s Defense Fund, was broadcast to us for her Keynote address from the Minneapolis Convention Center at the 23rd annual MLK Breakfast. Her address focused on the importance of investing in our nation’s children by installing a foundation that will facilitate quality education, an emphasis in art programs, safe neighborhoods, access to affordable health care, and positive family structures. Without building these foundations and investing in our children, we will fail to secure the United States’ future–leaving Edelman to ask, “will the United States be a beacon or a blip in history?” The morning breakfast was a seamless introduction to the following day of service in honor of Dr. King and his legacy.
Our group of thirteen went to Learning In Style, a school for adult immigrants and refugees in the metro area focused on areas such as English, Math, Computer, and citizenship. We split into several groups to accomplish different tasks. Some sanitized every inch of the classroom and daycare facility (meaning every LEGO piece) while others organized the “Free Store,” which is where I worked for the day.
The free store is, not surprisingly, a free store for anyone in the community to donate to or receive goods from. The most common items were clothing, but shoes, books, and kitchenware were among the other miscellaneous items available. My group took direction from Sister Marie Herbert Seiter, a long-time volunteer with the free store. She shared with us stories of common individuals that utilize this resource. Some are experiencing homelessness, some are single mothers, and some are simply in a pinch. Sister Marie Herbert was particularly moved by one individual who was searching for appropriate shoes to wear to an interview the following day. He found a perfect match and left the store beaming with more confidence than ever before. 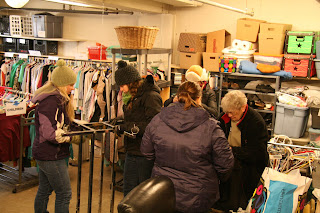 We concluded our day together by engaging in song, prayer, and conversation about serving others, experiencing poverty, and making lasting changes. Our day of service did not require any heavy lifting, excruciating working conditions or even direct contact with people. However, it meant wonders to an important non-profit in our community. It can often be difficult to work tirelessly towards something we may never directly see the effects of. But days of service like this one beckon us to ponder one of Dr. King’s most powerful quotes, “Life’s most persistent and urgent question is; what are you doing for others?”