As an AmeriCorps Member, I had the opportunity to plan a three-week summer program called Peace Camp.  Peace Camp is a day camp for students in grades K-12 where the topics of social justice, non-violent conflict resolution, cultural awareness, and working cooperatively are covered in a fun and engaging way.
When I first heard that I would be planning three weeks of summer programming for kids spanning the ages of 5 to 18, I’ll admit that the task seemed a little daunting.  I had written lesson plans and delivered those lesson plans before.  I had even written and graded tests, graded group projects, and improvised a few lesson plans while student teaching.  But creating fun and yet meaningful programming for all of these age groups? – I was a bit anxious.  Fortunately, with the support of the community members who had been a part of Peace Camp in the past and new international community members, the task proved to be well worth the effort, even being fun at points.

Every day at the beginning of camp, I was so nervous that things would not go as planned—that a volunteer would not show up, that a camper would not enjoy an activity, that a material we needed would be forgotten. Yes, those things did happen.  However, with the help of the numerous passionate volunteers and the positive attitudes of the kids, everything worked out.  The kids left every day with big smiles on their faces after singing “The Moose Song,” learning a new handshake from Ghana, or working together to cross an imaginary lava pit.  Not only did the kids laugh and have fun, but they learned as well. They learned about cultures from all over the world, that diversity is all around them, that people around the world maybe are not all that different from them, and that there are effective ways to deal with conflict that do not involve violence.

While to some the objective and message of Peace Camp may seem a little unreachable or unrealistic, the truth is that I saw a completely different group of kids at the end of the week than at the beginning.  I saw kids who were speaking new languages and learning new ways to interact with their peers. I saw kids who maybe one day will become peacemakers in their own communities. 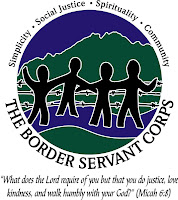 The goal of the Border Servant Corps is to provide support staff for established social service agencies that serve the marginalized population of Las Cruces, N.M., Juarez, Chihuahua, Mexico and El Paso, Texas, in particular. We seek to serve those living in poverty, the homeless or near homeless, immigrants and youth. Volunteers are encouraged and supported in exploration of a simpler lifestyle, life in community and spiritual growth.

Too Blessed to be Stressed
A Day in the Life of a Franciscan Mission Service Lay Missioner: Kitzi Hendricks
A Day in the Life at the Monastery of St. Gertrude: Sarah Teetsel
Living Simply So Others Can Simply Live