Coming from a Sikh background and going into a Catholic volunteer program was a pretty tough decision to make. I knew that I wanted to do a year of volunteer work and I knew that I wanted it to be faith based because I had been struggling with my faith for a while. The problem was that there weren’t any Sikh volunteer programs. I went to a Catholic college, but it wasn’t until my last semester that I got involved in the service side of things at the mission and ministry center. From there, I thought why not do a Catholic program? There was an abundance of them after all, and at the end of the day I would be doing good work no matter what religious affiliation the organization had. Lasallian Volunteers was aimed at making a difference and I was too, and at that point, that was all that mattered to me.
I think working and living with people of other faiths is one of the most important things someone can do to gain better understanding of a life and religion that is perceived to be completely different from their own. When it comes to interfaith interaction, I don’t think we need to necessarily talk about how similar one religion is compared to another and how they are all pretty much saying the same thing; which is to love one another and do good in the world. I think it is important to take note of the differences and embrace them. These differences are what make us unique, and learning about these differences helps us understand a culture and lifestyle from a different perspective. 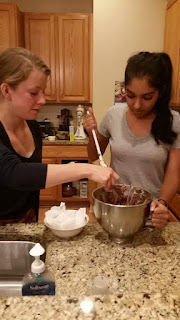 This past year and a half has actually made me grow closer to my faith. Before joining the program, I went to the temple once in a while. I did the things I was supposed to do without giving them much thought and not much else. If anything, I was questioning whether religion was something that I wanted as a part of my life at all. All it seemed to do was bring a great deal of trouble to the world and pit one group against another. But by living in a Catholic community and working at a Catholic ministry, I was forced to learn more about myself and where I come from, what my history is and what it means to be a Sikh. Co-workers and community members were constantly asking me about my faith because it was one that they did not know much about, and I was someone they could ask directly. I was disappointed in myself when I didn’t know the answers right away.  Going to my parents and asking them the questions I was asked and doing my own research online helped me understand something that had evaded me before. The more I learned the more I wanted to know.
Hopefully, this experience can be the same for others as well. Sometimes interfaith dialogue doesn’t have to take place in a formal setting. Simply going up to someone and asking a question can be enough. I know that I personally felt appreciative that people were even showing an interest and it’s through this simple back and forth dialogue that a relationship can be built to learn more about someone and their background and history. It’s easy to surround yourself with people who share your beliefs and think the same way you do. But life can present you with interesting opportunities and interesting people, and it is up to us to the make the most of that experience.

Telling Your Story: Teaching Volunteers How to Talk About Their Experiences
Reflection: 5 Favorite Memories with the Sisters of Mercy
Snooze Button Meets its End: Year of Faith (Part 1)
A Different Route to and through Service: Head as Well as Heart