Home > Uncategorized > Many Layers of “Justice”

We met in a ten by five foot room, which serves as a computer skills room, library, interview room and combined storage-closet for the new comers and sleeping quarters in the nighttime.  Through the grapevine Miguel learned that the free lawyer from the “Church” was attending to legal questions.  He must have waited fifteen minutes or more as the men were lined up outside the door, patiently waiting their turn as they sought second opinions, confirmation that their lawyers, prosecutors and judges were telling them the “truth.”

This, however, was not a free legal aid clinic activity in an office building.  We were in the jail/prison aptly named “San Pablo” located in Quillacollo, Bolivia.  Three hundred and fifty men are incarcerated in an old colonial home, where at most 150 should be housed. Lumped together are those from 15 to 75 years of age, accused and convicted, violent and non-violent, first time and repeat offenders. Clouds of saw dust filled the air because the men have assembled an open air carpentry shop in the former central patio of the mansion, making simple chairs and desks out of shipping pallets so they can earn enough to feed, clothe and medicate themselves as the government funds are woefully inadequate. As part of the Prison Ministry sponsored by the Catholic Diocese, I was doing my best to help them with their legal concerns.

After working as a Deputy Defender for the Legal Aid and Defender Association of Detroit for ten years and now working in the Bolivian prisons for nearly five years, I thought that I knew something about helping out women and men with their legal concerns.  After all, I had not only graduated from Wayne State University´s Law School, I had also obtained a law degree from the Universidad Mayor de San Simon in Cochabamba, Bolivia.  Brainwashed twice, as my family members and friends sometimes remarked. 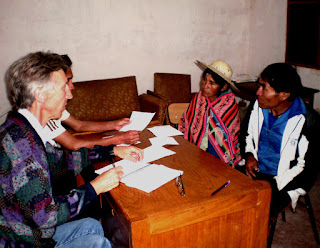 With my finely tuned legal antenna and practiced interview skills, I quickly gathered that Miguel had been arrested for selling drugs near a school, was a first time offender and used the proceeds to support his own habit.  So far, I thought to myself, nothing was complicated and I began to explain the requirements for a bond (According to Bolivian law–proof of regular employment or full time student status; verification by the police of his actual residence; proof of community / family ties by the presentation of birth certificates of his parents, spouse, siblings and certification by the local neighborhood association) when I noticed that he did not seem to be overly interested.  I also saw that my “standard” advice on the opportunity for probation for first time offenders, especially if we had him reviewed by a physician who could certify that he was a drug user, was not particularly interesting for Miguel.

Something or someone, as a person of faith I believe it was the Holy Spirit, prompted me to use a new skill that I had learned in a workshop on forgiveness and reconciliation—fundamentals for implementing restorative justice.  I asked Miguel how the drugs helped him.  He began to share that over a year ago his girlfriend had ended their relationship and that the drugs allowed him to sleep and dream about her.  He also shared that he had not dated anyone else during the last year and had her name tattooed on his arm after their relationship ended.

Upon reflection, I am amazed how the restorative justice focuses on the underlying, unmet basic need that results in the actions we label in the criminal justice system the crime, is so critical to changing the individual´s future and preventing recidivism.  Basic needs in the restorative justice sense are those such as love, acceptance, respect, being part of a group or family, power, freedom, personal security and pleasure.  If I had never asked how the drugs affected him, I would have never gathered an insight into his basic need for love and acceptance.  Miguel shared that his parents simply told him to “get over it” whenever he wanted to talk about his feelings about his ex-girlfriend and his basic needs.

Today I wonder about the hundreds of interviews I have conducted as a criminal defense lawyer.  How many really addressed the unmet, underlying human needs of the women and men I interviewed?  How much of my training and my professional pride has been too narrowly focused on just one aspect of the totality of circumstances of the detained person?

My prayer is that it is not too late for me to become more concerned with the integral needs of the women and men I serve.  I sleep better at night knowing that Miguel is now receiving counseling to allow him to verbalize his basic needs and to identify alternatives to drugs to satisfying those needs. I am grateful to Catholic Volunteer Network for leading me to this place.

Palm Sunday of the Lord's Passion Reflection by Lydia Olsen
What the Women Taught Me: Getting Things Done with Franciscan Outreach Volunteers
Community and Recruiting at the Fairs
Moving Closer to God by Drawing Closer to Each Other