Home > Uncategorized > Reflections from a year in Bolivia 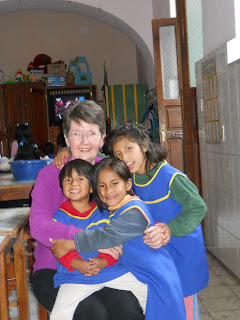 In a way I was multi-tasking. While unpacking , one part of my mind was deliberating where to put this & that and muttering disgustedly, “ Why have you accumulated so much stuff? And all these books…it’s a sickness, that’s what it is,” while the other part of my brain was processing my experience of living in Bolivia— the poorest country in the western hemisphere—for over a year.
I never realized how very “opinionated” I was, as my mother would call it. In the 50’s I was a traditionally conservative Catholic. In the 60’s I became a liberal Catholic, in the 80’s I became a progressive Democrat. After 9/11, I became an anti-war activist. I thought these beliefs explained the world to me. By the end of my stay in Bolivia, my mutterings of “I don’t understand” became almost a mantra as I breathed it in & out. None of the tidy categories that had neatly framed my world seemed to fit any longer. One after another, I heard them shatter like broken glass as my new experiences crashed up against them.

As the Easter story unfolded in the liturgical year and all my worldly possessions were being unpacked, an articulation of that reality was forming in my mind. The reality of the meaning of Jesus’s life and message was making itself known to me in a deeper way. I became awed by the beautiful truth his life spoke to. That responding to suffering and serving the needs of others with commitment & compassion is the transforming work of grace. To embrace the powerlessness of the poor & marginalized is to embrace the cross.

It was gut wrenching to see the rows of infants in their cribs in the orphanage having their bottles propped up because no one had time to hold them; to see old women & children picking through the dumpsters in the “better” neighborhoods looking for plastic bottles to redeem; young mothers with nursing babies & toddlers begging on the city sidewalks. It was equally disconcerting to see church goers carrying their heirloom baby Jesus statues to the altar to be blessed, walking past indigenous women with infants begging at the church door, and being invited to admire a classic antique car (a white ’37 year old Mercedes) –one of ten owned by a wealthy relative of my host family. A chair was set at the dinner table for his little dog that he fed food by hand from his dinner plate.
Witnessing the lives of some of the countless individuals who tirelessly give of themselves to “the least among us” has humbled me as nothing before. This new creation asks, “Death, where is your sting”?  “I don’t understand” has become a stance in the face of an overwhelmingly complex world and trust in a divine purpose to it all has replaced all my old opinions.