Home > Uncategorized > What the Women Taught Me: Getting Things Done with Franciscan Outreach Volunteers

By: Kaytee Kinsey, Franciscan Outreach Volunteers
Service Site: Franciscan House of Mary & Joseph
The first few weeks of being here, a supervisor complimented the fact that I had quickly learned all of women’s names. He had also seen how happy they were to see me.  Then he said something that I doubt I’ll ever forget— that our guests are rarely noticed outside of the shelter, that very few people would take the time to learn their names or take the time to have a conversation with them.  Typically, they are looked over in the crowd or sidestepped by others on the sidewalk. Eye contact is generally avoided.  So the fact that I could call them by name, be there with a shoulder to cry on or be someone to laugh with…were all interactions our guests had routinely been denied.  It challenged me to get to know the ladies better, learn their stories and remember the details, like the fact that one woman loves plaid scarves and another has thirteen grandchildren.
I see myself in them every day.  The only difference is that I am fortunate enough to have people in my life that would pick me up and lead me in the right direction if needed. 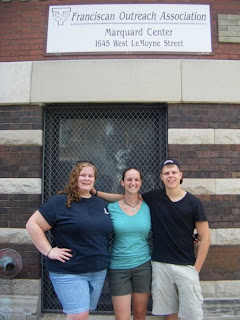 There are also women who have tragic backgrounds.  Some abuse drugs and alcohol, some deal with various mental problems.  There is one woman who does not usually talk, living in a world of delusion because it’s easier than remembering the terrible past she experienced.  But when she does talk, she has an infectious smile, and she expresses her thanks—revealing a heart of gold.

One woman once told me that she had been sitting in the park when a teenager began to throw stones at her.  When she asked this kid why, they replied that it was because she was homeless and that was “disgusting.”  The woman shook her head and replied, “You know, when I was fourteen, I wasn’t homeless.  I was just like you.”  That statement really struck me: anyone can become homeless. There are women there who are educated, humorous, feisty, hard-headed, and very loving— just like me.

These women love fiercely and look out for one another.  They care for one another, celebrate their achievements together and treat each other as a makeshift family. I remember a seventy-one year old who came in and was assigned to a cot, which is low to the ground and not very comfortable.  I saw another woman, who was no spring chicken (so to speak), offer up her comfortable bed for the night so the elder of the two could get a good night’s rest.

Sometimes, I do get frustrated.  I tire of having to break up arguments, of having to be the voice of reason to someone who won’t always listen.  But the good outweighs the bad every time.  It’s all in those moments—like when the sixty-year-old woman hugs you bye and tells you not to be gone for too long, or the pregnant woman who shares with pride the news that she and her little bundle of joy received housing or the lady who is attending college comes and shows you the paper she made an A on.  They love to tease me for always saying “ma’am” or “critter,” calling me their southern belle.  These ladies fuel me, make me laugh, and give me amazing and sometimes heartbreaking stories to share, but they never cease to amaze me.  They’ve taught me more about humility, patience, love and compassion than I ever believed possible.

Kaytee Kinsey is originally from Durham, NC. After graduating from Appalachian State University in 2011, she decided to do a year of service in Chicago. For a little over a year she worked for an organization called Franciscan Outreach Association, and served at a homeless shelter on the west side of the city. After she finished her year of service, she moved to a small town in southern Colorado where she is now working with those who are afflicted by rural poverty and homelessness.

Moving Closer to God by Drawing Closer to Each Other
What you need to know about faith-based service?
Standing Against Environmental Racism
The Desire to Serve: Getting Things Done with Christian Appalachian Project