Home > Uncategorized > A Year of Miracles in Detroit 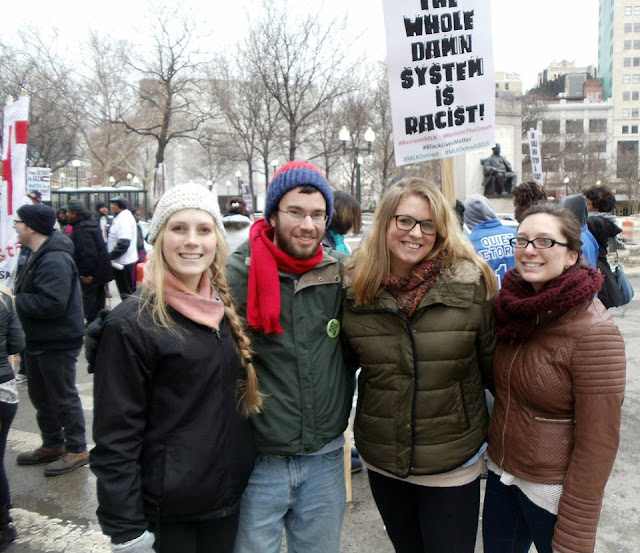 I tell people all the time that miracles happen. Some unexplained force comes into a situation and changes it in ways that people never could have imagined, often with positive, inspiring or beautiful results. Though some people react skeptically to the possibility of miracles occurring, I believe that my year in Detroit with Mercy Volunteer Corps has been full of miracles from the very beginning.

I’ll start my story right there: at the beginning. I was sitting in the Chester County, Pennsylvania public library, clicking through job listings on the website idealist.org. I had just been turned down by the one job prospect I had, and my quest to work with issues related to social justice seemed to be at a dead end.
But then, like a bolt of lightning, I saw it: a job posting for someone working with people with disabilities in a poor area of Philadelphia through an organization called Mercy Volunteer Corps. I couldn’t believe it – of my two most recent volunteer jobs, one was working with adults with developmental disabilities, the other living at a community for people recovering from drug and alcohol addiction in North Philadelphia. The position seemed like a perfect match, and I called for more information only to find out that the position had already been filled. “But,” said the voice on the other end, “we do have one spot left in Detroit.”
With a burning desire to work directly with issues related to social justice, I decided to read more details about the opening at Cabrini Clinic, America’s oldest free health clinic. The clinic’s small staff and history of advocating for social justice in healthcare appealed to me as an ideal place to get involved with issues related to social justice. Within days, I had been accepted to the program, and in a little over a month I was living in Detroit. 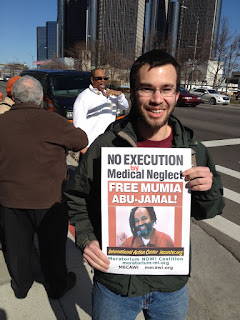 When I arrived in Detroit, I found a city full of people actively working to create a more just society. My placement at Cabrini Clinic put me in contact with one of the most connected people in the struggle for justice in Detroit, Sister Mary Ellen Howard, former Executive Director of Cabrini and a member of the Detroit People’s Water Board, among many other organizations. By the time my first month in Detroit was over, I had attended a People’s Water Board meeting and several other justice-related gatherings with Mary Ellen. Like a duck taking to water, I began to make my own connections with people involved in the struggle in Detroit.
A breakthrough that allowed me to become involved as a contributing member to the movement for justice came when I attended a meeting of Detroiters Resisting Emergency Management. I graduated from Penn State with a degree in Information Sciences & Technology, so when I sat down and heard the group discussing the need for someone to update their website, I knew I had found a perfect opportunity to contribute my IT skills to the fight for justice in Detroit. I soon had administrator access to the group’s website and began posting articles that group members sent to me, something I have done several times per week for several months now.
This seemingly simple contribution has led me places I never could have imagined. I now personally know many of the key people involved in the struggle against water shutoffs and tax foreclosures in the city, and most amazingly to me, contributing my IT skills has allowed me to be not just an admirer of these talented and dedicated people, but a co-worker and comrade as well. Most recently, I have been asked to help create a website for legendary Detroit activist Grace Lee Boggs’ 100th birthday party.
I don’t know any other way that I could have become so intimately involved in a struggle so important to me in a way that allows me to contribute my greatest gift of technology skills.
Whether this is a miracle or not is open to interpretation. However, I would like to close by comparing my presence in Detroit to a seed, one that finds fertile ground and begins to grow. Eventually, it becomes so big that even birds and other animals rest on its branches and enjoy the sunlight that gives life to all beings. I feel that my work here has already touched many lives and made a positive impact in the struggle for justice in Detroit. However, like any living thing I want to keep growing and reach my full potential. Eventually all plants and animals pass away, but it is the image of each one of us resonating with the spirit within at such a frequency that the whole world hums along with us, that is the true miracle of life and highest aim of any person here.
But it all starts with a little, dark seed in cold ground. Until, by an unexplained force, green shoots extend upward and hairy roots down. Why these changes at this particular time and in this way? Who can explain it? You can provide your own explanation. I call it a miracle.

A Day in the Life
A Day in the Life with the Volunteer Missionary Movement USA: Kristin and Billy Byrnes
This Pride, Taking Your Next (or First) Step to LGBTQ Inclusion
CVN Creations: Volunteer's Projects to Beautify their Communities