Home > Uncategorized > My Will, Your Will, Our Will: Kate Joins Catholic Volunteer Network 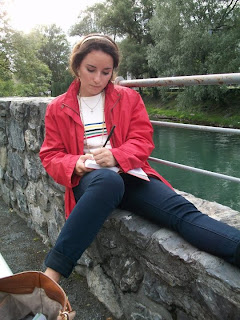 I stepped off the metro surprised at how quickly it was all happening. Only two stops away? I had only been on the screeching metal contraption for less than ten minutes. It happened again on the walk over. Only two blocks away? But there it stood, the single “skyscraper” of Takoma Park that would house my new office and become a very familiar sight over the days. An elevator ride up. A quick walk down the hall. Suite #820. Home of Catholic Volunteer Network. To say I always planned on being here would be a lie. To say I even had my eye on the east coast would only delude you further. Unlike my many pencil skirted, cardigan and cute flat wearing new comrades here, I did not grow up thinking, planning or knowing that I wanted to live in Washington, D.C.
Throughout senior year in college, everyone seems preoccupied with getting a job and sounding calm and collected when asked “what are you doing after graduation?” We envision taking a sip of a mature adult beverage, looking back at the questioner with confidence and then unveiling our world-changing or money-making plans and leaving them speechless with awe. Yet by early May I was still “unemployed.”
I was surprisingly calm, having decided early on not to be overwhelmed by “societal pressure” or by the “what are you doing after graduation?” question. I would not be another chicken running around with her head cut off. I would not have a meltdown. I was not worried about the “perfect” job and piles of cash. But I was interested in doing something honorable, fulfilling and nourishing. I still wanted to grow. If a job opportunity didn’t immediately present itself, I decided I wanted to give back to my community in a way in which my college education might not be directly applied: a year of service.
Wheels began to turn. A conversation with Theresa Ladrigan-Whelpley at SCU’s Ignatian Center led me to Catholic Volunteer Network’s RESPONSE book. I remember sitting in Campus Ministry for over an hour as opportunity after opportunity flew past me with every turn of the page. I sat quietly searching and then rushed off to class, my head buzzing from the swarm of new information.  Applications began to be filled, recommendations were requested and resumes sent.
Around the same time, I landed a spring internship with Catholic News Service (CNS). I was a Communications major with an emphasis in journalism, touting an English minor, buried deep in a final feature story, in love with writing and with my Catholic faith. An internship in which I could combine the two seemed like a mirage in the desert of job opportunities…or lack thereof. I flew to the nation’s capital for an orientation weekend.

“What are your plans after graduation?” the CNS team asked me warmly. I took a deep breath. “I’ll be traveling a lot this summer. But afterwards, I’m thinking about doing a year of service through the Catholic Volunteer Network,” I responded. “That’s great. You know the organization is looking for some help with Communications right now, right?”

An e-mail. Another resume. An interview. A conversation. A job.
And this is why if I were to say that this had all been part of plan, that I had known I wanted to be on the east coast, wearing my own take of the pencil skirt, cardigan and cute flat uniform, riding a screeching metal contraption and stepping “coolly” into the single “skyscraper” of Takoma would just be a lie. But I’ve found that it’s when we surrender to God, when we follow the example of Mary and say “let it be done according to your will,” and when we join Jesus in the garden of Gethsemane and say “your will, not mine,” God has a funny way of taking His will and your will and making them one.

The Ascension and Stepping into Service
Travelin' Thanksgiving
Prayer Life on the Road: Keepin' it Real
A day in a life of... A Salesian Volunteer