By: Caitlin Baummer , Recruitment Associate
Two weeks ago, I posted a poll on facebook asking friends and followers how I should challenge myself to simplify over the coming two weeks. The poll included the following options:
1. Don’t watch TV
2. Only drink water
3. Limit computer time to one hour per day
4. Only pack two pairs of shoes (I really like shoes)
5. Don’t wear make up
Voters overwhelmingly chose option number two- only drink 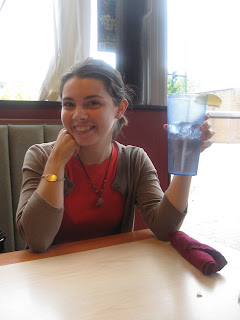 water. This is actually what I was hoping to be the winner. For a little while I’ve been conscious of the fact that I do not drink enough fluids, and I often choose juice or soda over the purest form of hydration. To go along with this change, I was sure to bring my reusable water bottle and made a concerted effort to fill and use it, only purchasing bottled water as a last resort. In addition, I wanted to challenge myself in some way technologically, so I decided that I would also refrain from watching television for those two weeks.

As I mentioned in my last post, each of the pillars presents its own set of challenges and joys. This was no exception. I was glad to take on a new commitment to H2O, but I had my moments. The most difficult time for me to drink water was at breakfast. For some reason, I especially enjoy a glass of orange or apple juice with breakfast. This was made more difficult when a friend told me about the delicious pumpkin spice hot chocolate that he had just ordered from Starbucks. The next morning, I found myself standing, staring at the Starbucks menu in the Columbus airport. I had to remind myself of the promise that I had made to my readers and myself. But overall, I noticed the difference in my own body. During my week in Ohio, I noticed that I had more energy and did not feel as weighed down. Then, after catching a cold over the weekend, I am sure that my increased water intake helped the cold to subside quicker.
Oddly enough, I didn’t actually have too many opportunities to watch television over the last two weeks. During my week in Ohio, I was only in a hotel for two nights (staying with friends the other nights). Furthermore, the hostel at which I stayed in New York City, did not have a television in the room. The hostel was a challenge in simplicity in itself. I had grown used to the comfort of hotel amenities. This room had a set of bunk beds, a mirror on the wall and a shared bathroom in the hallway. I also did not have the convenience of in house breakfast.
But I digress, those two nights that I spent in the hotel, I felt as though the TV was staring me down saying “turn me on, turn me on”, but I refrained and I’m so glad that I did. During that quiet time, I was able to collect my thoughts about the busy week that preceded, the relationships that I had built and rekindled, and the week ahead. I was far more productive in the office work that I conducted and even finished a book (Harry Potter 2). The more I focused on being present to these thoughts and actions, the less I noticed the TV.
Beyond just being a fun experiment in sacrifice, these practices made me think. Particularly when it came to water. Frequently, when I filled my water bottle, or took a sip, I thought about the individuals in the world who do not have access to clean drinking water. According to water.org, approximately one in eight people lack access to safe water supplies and 2.5 billion people don’t have access to a toilet. (http://water.org/learn-about-the-water-crisis/facts/) This reminded me of a segment that I heard on NPR about “flying toilets” in Kenya, a practice where a person is forced to defecate into a plastic bag and then throw it as far as possible because he or she does not have access to a toilet. You can only imagine the embarrassment and sanitary affects for individuals living in these communities, but they have no other choice. (http://www.worldvisionreport.org/Stories/Week-of-May-29-2010/Flying-Toilets) 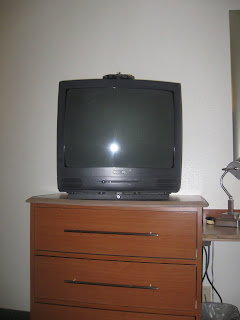 As for refraining from watching television, I can’t say that it brought to mind any specific issues of social justice. (Although, I did save energy by leaving it off.) What was more obvious to me was the way that I was able to be present in the moment, to myself, my surroundings, phone interactions, prayer etc… This is an aspect of simple living that is often left out of conversations. So many times we think that to live more simply, we need to have fewer material possessions. This is certainly part of it, but it is also about simplifying our minds and hearts. Truthfully, they go hand in hand- if we have fewer “things” then there are fewer possessions to occupy our minds. And if we are fulfilled in the simplicity of our relationships and interactions, we feel less of a need for material possessions.
So where do we start? It is a bit of a “chicken and the egg” scenario, isn’t it? That’s where the other pillars can help us. If we continuously pray about our commitment to simplicity, God will give us strength in our moments of weakness. If we surround ourselves by a community of supportive people we can hold each other accountable and provide encouragement. Finally, by carrying out works of social justice, we are reminded of how simple living allows us to be in solidarity with the poor and marginalized.
I was listening to an interview with the author of Steve Jobs’ biography (again on NPR). He reported that Jobs said the following “Simplicity means understanding the depth of the complexity that you must overcome.” If we commit ourselves to understanding the depth of the complexity of social justice issues, relationships and faith, then can we achieve true simplicity.