Home > Uncategorized > Where the Boys Are

How many programs have communities with three times as many women as men? It’s a reality that many of our programs face each year. The volunteering sector has always been open to both men and women, however, women traditionally volunteer at higher rates than men. How can we encourage more men to participate in volunteer service opportunities? 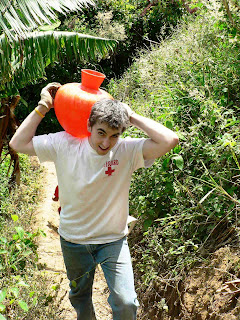 According to the 2010 Economic News Release, “Volunteering in the United States,” from the Department of Labor, the volunteering rate for women actually decreased from 30.1 percent to 29.3 percent, while the volunteer rate for men was basically unchanged at 23.2 percent.
Some larger, more recognizable programs seem to have the luxury of accepting applicants from a large pool. So, in theory they would have a closer ratio. However, in 2009, Peace Corps reported 7,671 total volunteers with 4,624 female and 3,047 male (60 precent female and 40 percent male).

In the most recent Catholic Volunteer Network survey (full results to be published next month at our annual conference), programs reported 61.6 percent of their volunteers were female and 38.4 percent male. This is actually a slight increase in males over the previous year (64.8 percent female and 35.2 percent male in 2009-2010).

Over the last five years, the rates of male volunteers reported by Catholic Volunteer Network has stayed relatively consistent (close to one third).

We see many of the same trends on college campuses and even before college. Tom King, Assistant Director of Campus Service at Loyola Marymount’s Center for Service and Action, reports that 37 percent of students involved in service organizations on campus are men. So, LMU’s numbers closely align with the national trends as well as Catholic Volunteer Network’s.

Obstacles
In talking with professionals working on college campuses as well as some Catholic Volunteer Network colleagues, it is apparent that there are a few common perceived obstacles. First, many young men feel pressure to get a job in their specific career field right out of college. Society, their parents and even their peers expect them to move right into their studied career field after college. Traditionally, the majority of men study math, science or business, but very few volunteer programs offer placement options specifically using these skills (aside from education which not every one wants to pursue). It’s important to not only offer options, but to also help potential volunteers see the potential benefit of their background in math, science or business with particular placement sites.

As a student at John Carroll University, Andy Costigan studied economics and Spanish. When he joined the Jesuit Volunteer Corps in 2008, he hoped he would be able to use his business knowledge and Spanish skills. “I think it’s a wonderful gift to be able to offer diverse skill sets to organizations that volunteer programs work with,” Mr. Costigan said. “I started with Homeboy Industries working on education curricula and then the organization hit hard financial times. I was able to transition into the development office and utilize my business background to help their fundraising efforts.”

Second, is there communication about these opportunities? Word of mouth is one of the most common ways volunteers find out about programs. Do men know these experiences exist? Are volunteer programs doing their part in communicating the requirements, expectations and experience of serving? “Some male students I speak with have a misconception about what’s required to participate,” Mr. King said. “They think that because they did not participate in a service organization on campus that they’re not qualified.”

Finally, are men comfortable enough with their faith and with sharing it in community to take the leap into faith-based post-grad service? Many programs emphasize reflection and sharing as key components. Is this model a more feminine model? “Masculine spirituality emphasizes that doing, or acting, is the primary way of developing a spirituality – not hearing, not talking, not reflecting,” said Fr. Richard Rohr, OFM, Founding Director of the Center for Action and Contemplation. “To be sure, reflection is part of a masculine spirituality, but it come later, after the action.”

Catholic Volunteer Network programs do offer both sides of service – the action as well as the reflection. However, it may serve many programs well to take a critical eye to their materials and the language they use within the organization.

Solutions
It’s easy to say that Catholic Volunteer Network’s statistics are just mirroring the national trends, but how do we break out of that? Here are a few hopefully innovative ideas on how to motivate men to volunteer;

Serving with an Open Heart
God Works in Mysterious Ways
Who is this pink baby?
Be kind. Take care. Serve.