Home > Uncategorized > A Year Of Many Names 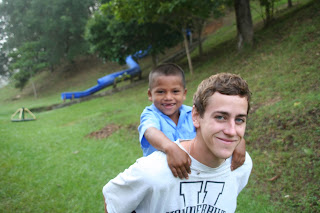 One of the first overwhelming things about starting life at Amigos de Jesus was something that I hadn’t thought about for one second. I worried about not knowing a word of Spanish before boarding a plane to Honduras. I worried about boarding a plane that would land in San Pedro Sula, the city with the world’s highest murder rate. I worried about all of these things complicating my marriage, which was not yet a month old. But neither Ali (my wife and my motivation to volunteer) nor I thought for a second about having to learn a bunch of new names. Through the application process we easily set to memory the major players: Fr. Dennis, Emily Ford, Amy and Wilson Escoto. Once we got here it was fairly easy to learn the volunteers’ names, as they were Americans like us and we spent ten days living in a house with them. The kids’ names were another story.
Ninety new names was plenty, but as you may have thought, but I never did, the names in Latin America are a little different. Jose, that’s easy enough. But it was a little harder a few minutes later when I met Josue (Hoe-sway), and then felt hopeless the next day when I met Jesuan (Hey-swan). Also, we have a Jose Antonio, a Jose Alexander, and a little girl named Maria Jose. 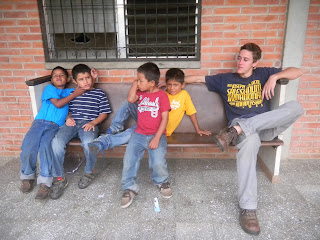 The group of Jose-ish names was just the start of the challenge. Knowing kids names allows you to get their attention and avoid too many awkward “hey there …buddy’s.” To live in this world you also need to know the nicknames. If you insist on political correctness, well come down and change the culture yourself. We have a “Chinito”— little china boy, “Mata Perro” – dog killer, “Negro” and “Negrita” – black man and little black girl, “Chucho” – puppy, “Chango” – monkey, “Chimpa” – short for chimpanzee, “Cabeza” – big head, and “Shrek” – the resemblance fades as he is thinning out and bathing more consistently. You don’t have to use them, but this is all information you need to know if you want to understand what the kids are saying to one another. Though at times, it’s better not to know.
Eventually we all figured out the names. Counting the staff, plus kids, the total number is about 160 names you need to know. Some of my favorite names are Virgilio, Otilio, Pipo, Ivis, Henrry (roll the double Rs if you can), Arcadia and her little sister Cleofis, and Fany. It took me about two months to commit the last of them to memory.
Tomorrow is the last day I will be called Padrino. Padrino is my job title; Madrina is my wife’s. The words translate to godfather and godmother. But those weren’t the only names we have been called this year. I have gotten a lot of “gringo” – white man, “viejo” – old man, (which was funny because I am 25 and look about 18) and “perro” – dog, which makes more sense as an insult here because the dogs are filthy animals. Surprisingly, about six months passed before anybody bothered to call me “cuatro ojos” – four eyes. I will spare you the bad words which I have been called in some of our children’s less charming moments. 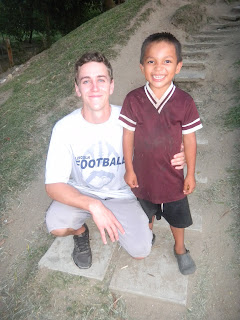 Padrino is the name I will miss the most, which is ironic, because it represents a job that was absolutely exhausting to me. It was exhausting because being a Padrino requires the Honduran staff, and for 1-year my wife and I to do what is not possible. The Padrinos work at Amigos de Jesus to compensate for parents, and they fail every day. It is not the fault of the Padrinos, it is not the fault of Amigos de Jesus, there is no compensating for the absence of parents, there is only attempting and failing. They will continue to fail every day as long as Amigos de Jesus takes in kids. They wake up too early, and stay up too late. They clean clothes, bodies, and toilets. They get hit by fists, spit at, food and rocks thrown at. They do what parents do, but they are not parents.  “Godparent” is a good name for them. Not only because they fulfill the responsibility of godparents, but because it reminds us that we are working for and living with God’s children. The children who at times scream at, spit at, and hit us, are the same ones that turn into responsible young adults like Keka, who just spent months working hard to pass a test that will allow him to go to college. Amigos de Jesus – Friends of God, is a good name for this home. Padrino is a good name for the workers, because they are raising God’s children.
To learn more about service opportunities through Amigos de Jesus, please click here.

The Visitation
Palm Sunday of the Lord's Passion Reflection by Colleen Quigley
Good Eats - Volunteers across the globe learn to cook on a budget.
Everyday Grace