Home > Uncategorized > Dwight, Darlene, and the Importance of Whimsy 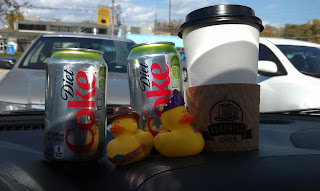 Everybody needs a road buddy, particularly of the easy-going, chill variety. I couldn’t have asked for better companions than Dwight and Darlene, my fearless road warrior rubber ducks. I have been a fervent supporter and enthusiastic collector of rubber ducks for quite some time now. This began one Christmas when my Aunt Leenie (who specializes in whimsical gag gifts) gave me and my siblings a rubber duck version of the classic Nativity scene. Yes, you read that correctly. I quickly took ownership of the set, and each year I lovingly place them out on top of the piano, next to our more traditional, hand-carved Nativity scene. My mom was initially resistant to this, but has since come around, and now embraces the ducks with all the love they deserve. 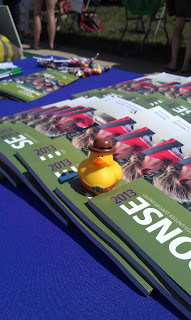 I’ve since sought out and been gifted various ducks, ranging from the entire cast of characters of Dicken’s A Christmas Carol (again, kudos to Aunt Leenie), to a firefighter, a chef, and many more professions in between. So it was with nothing less than sheer glee that I spotted a giveaway of rubber ducks at University of Maryland’s First Look Fair, the very first recruitment fair Erica and I attended on our whirlwind tour of the USA this fall. Erica graciously offered to remain at the booth by herself while I ran over to the other booth, explaining my love for rubber ducks to all there, and asking what exactly I had to do to win one. The perplexed woman working the booth (turns out it was the student health center stand) explained that I needed to take a survey about healthy eating habits on college campuses in order to win a rubber duck. Done and done! By the end of the day, Dwight joined the ranks of my small duck army. 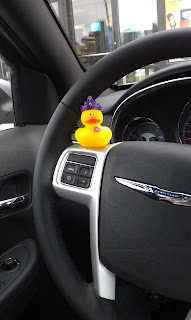 Tragedy struck at the end of my Chicago circuit (yes, directly related to my frazzled state post-driver’s license-losing incident), and Dwight was accidentally left behind at my friend’s apartment. Enter, Darlene. Darlene and I traveled solo while my friend mailed Dwight to my next destination: Columbus, Ohio. Much to my delight, my friend Denise had included a small pack of almonds and a handwritten letter explaining she didn’t want to send Dwight off without some snacks for the road. After that, Dwight and Darlene traveled together with me all over the U.S., making friends everywhere they went, and if we’re being honest, really gathering quite the loyal crew of followers. Darlene was even kidnapped and held for ransom at the University of Dayton’s fair, and the JVC recruiters gallantly rose to the challenge of hunting down the culprit (I’m looking at YOU, Fr. Rick…) and returning her safely to my booth.

Dwight and Darlene, though goofy and whimsical, bring people together. As any recruiter will tell you, it can get real lonely out there on the road. Who would have thought a pair of rubber ducks could teach you the importance of companionship, starting conversations with strangers, and above all, the crucial life lesson of adding a dose of humor to everything we do? I personally would like to take this moment to thank Dwight, Darlene, and all the people we met along the way for appreciating all the goodness a touch of whimsy can bring to our lives!