Home > Uncategorized > Is “Going Green” the Christian Thing to Do?

This month, we will be exploring some themes of sustainability and the environment leading us up to Earth Day celebrations. This is the first installment of our Earth Day tribute. 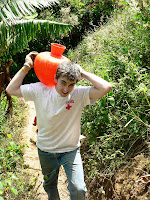 When most Christians hear the word “stewardship,” they probably think of how they handle their time, talent or treasure. But what about being good stewards of the earth? We should seek to be good stewards of all that God has created, safeguarding it until God’s return when all creation will be restored. When we mindlessly consume and live without any regard for what effects our actions have on creation and its inhabitants, what are we really saying about that creation?
The Scriptures gives us direction as to what we are supposed to do with God’s creation. But it is often the truth of what’s happening around the world that helps us break open the Scriptures.
Here are some disquieting statistics, provided by Carbon Central Network (www.carboncentralnetwork.com):
It’s easy to feel that our small individual actions don’t really make a difference. But the seemingly unimportant steps we can take to conserve the energy we use have a significant bearing on our earth. For some simple suggestions of what you can do, check out: http://science.howstuffworks.com/environmental/green-science/save-earth-top-ten.htm

Being a steward over God’s creation sounds great and responsible, doesn’t it? But deciding to be more environmentally friendly is the easy part. Actually doing it is more difficult. Going green means keeping ourselves up-to-date on what does harm to the environment. It may also mean doing without some of life’s conveniences. But in time, becoming environmentally friendly will just be a natural thing to do in order to care for God’s creation!

A Day in the Life of a Catholic Charities Service Corps Volunteer: Krista Fultz
Reflection: The lives of vowed religious are reminders of our own paths to holiness
Exploring Vocations on World Day for Consecrated Life
5 Tips for Developing Your Spiritual Life